Trade Box of 3 x Panhard Articulated Lorry 'S.N.C.F.", by French Dinky Toys, 32AB. With Convex Wheels. Near mint (1), near mint plus (1) very near mint (1) /in TRADE BOX (with dividers). Scarce item from The Berlin Collection. 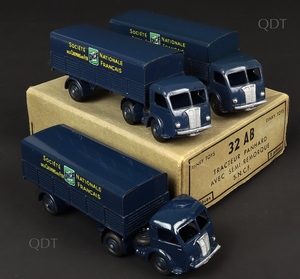 This version was produced between 1954-59, before its re-numbering to FD575 in 1959. Sleek deep blue finish and painted convex wheels. Versions with all-yellow lettering at the sides, and SNCF within a bright green ‘map’.

The distinctive lettering and green French map logo are complete on both sides (couple of tiny marks to the map on one, the rest are crisp and vibrant). The original tyres are well-shaped, generally fine and supple, although one model has a couple of tyre flat spots.

Near mint graded example:
Notable chipping at a front wheel arch, in particular.

Near mint plus example:
Little as-made minor casting defect to a wheel arch.

Very near mint example(1):
Only the most minor marking.

Presented in the hard to find plain buff shopkeeper’s Trade Box complete with original dividers.
The plain buff card box is complete and sturdy and looks as if has been handled only rarely. Print is strong at the lid ends. No tears or repairs. A little age wear/grubbiness and a penned cross on the lid. French Dinky Quality Control is faintly stamped on the inside of the lid.
With original dividers too. 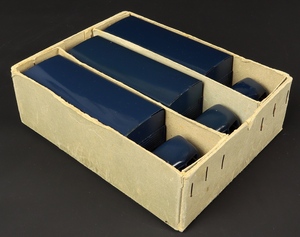